Monzo, is a new UK startup which aims to rebuild the way we handle our banking from the ground up by removing the superfluous and providing a clean, instantaneous and intelligent experience for a modern society that's inseparable from technology (syn. Millennial). Despite what you might expect of a bank, Monzo actually doesn't have any banks, that is, it has no physical bank branches that you can pop into to steal a pen. Rather, Monzo (previously Mondo) is an app.

We are building a bank for people who live their lives on their smart phones. For people who want to get things done in a click and who don't see the need for branches and cheque books.

But does it achieve its grand goals of revolutionising something which dates back to 2000 AD?

I was given access to the closed beta (on Android) - this includes being issued with the 'Monzo Card', a prepaid debit card, more on that later. Initial thoughts? Hmm. Good. Kinda. The best way to put it: my expectations were met, but they weren't high. I'm not going to be too critical, the app is, as I've said, in beta. As such I wasn't expecting an all singing all dancing AI bank, as it stands the features are limited, at least on Android, but those that are there - they're good.

Of course, I didn't just get into the beta by fluke, I had to wait, and wait, and wait. That's three whole waits, otherwise known as months, I registered my interest in July and the Android beta was released last month, I downloaded it the day it came out, only to be greeted with this: 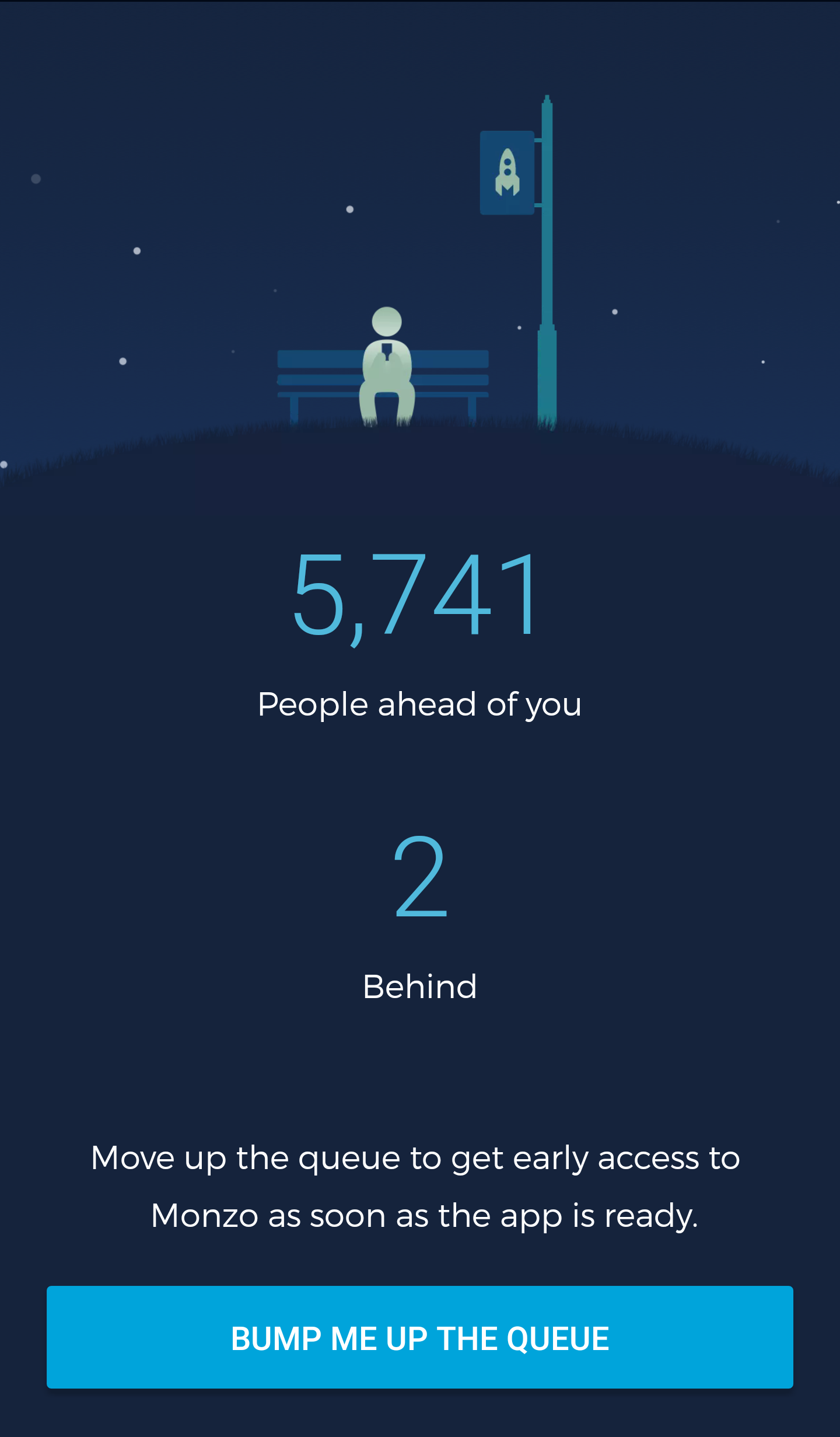 Luckily, referring friends via the queue bump option promised to knock me up by a few thousand places, and I was there in about a week. However, after being notified that I'd gotten access, I had a moment of deliberation. You see, despite it's grand aim, Monzo isn't yet a full bank.

Monzo is authroised by the Prudential Regulation Authority to deal in financial affairs, but as stated on their FAQ: "Our Authorisation is currently restricted, meaning we can't yet offer full bank accounts." What this translates to is, you don't get a sort code or an account number, which means, no access to "Faster Payments, Direct Debit or Standing Orders". It's like being given a cake with no frills, and then when you bite into it, it turns out to be a fruit cake.

This presented me with a dilemma, because to open an account you needed to deposit £100 in the account, this £100 is put onto a prepaid card which, in all fairness, is enabled for chip & pin and contactless payments. My dilemma is, this is money going into a very limited account provided with by a startup, it has all the makings of "Well when they said they wanted £100 for a two page app beta, I really should've known".

I should note that in the future Monzo will (hopefully) offer fully fledged debit cards like any other bank, but given the current financial limitations on them, this is all they can offer.

Of course then I remembered I'm young, free, and spend nearly as much on single keyboard keycaps. 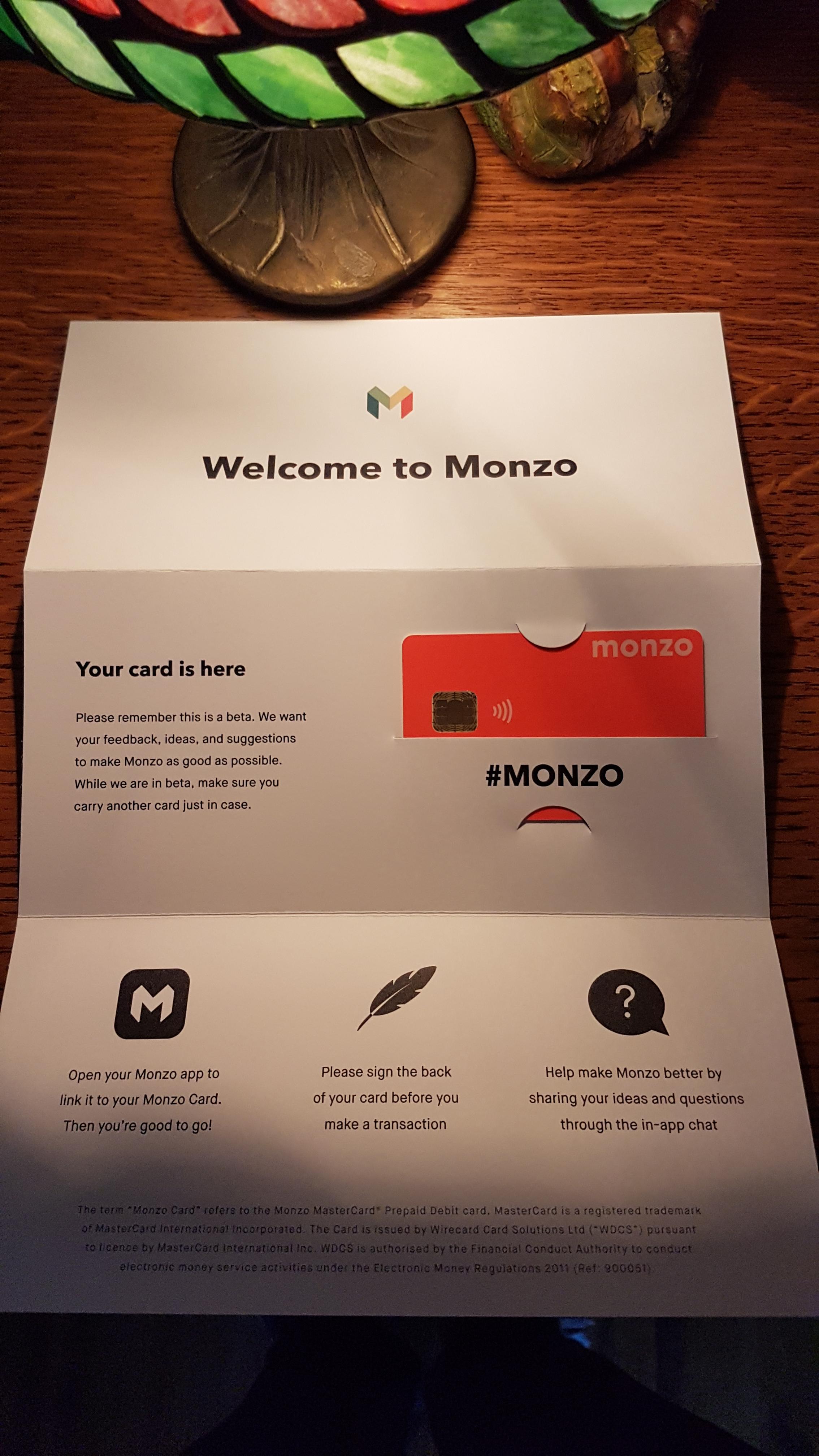 You may be able see now why I initially described the target audience as millennials, I ran the idea by my parents, both middle aged, and both thought the idea was nightmarish, I of course couldn't disagree more. The letter is very minimal, very clean, and very straightforward - put the letter down and get your phone out, paper is a thing of the past it seems. There are no policy documents, no T&C's, nothing of any real substance, instead we have some nice fonts, a big header, and of course, a hashtag. Monzo knows their audience, so well in fact, they even knew they had to include this warning: 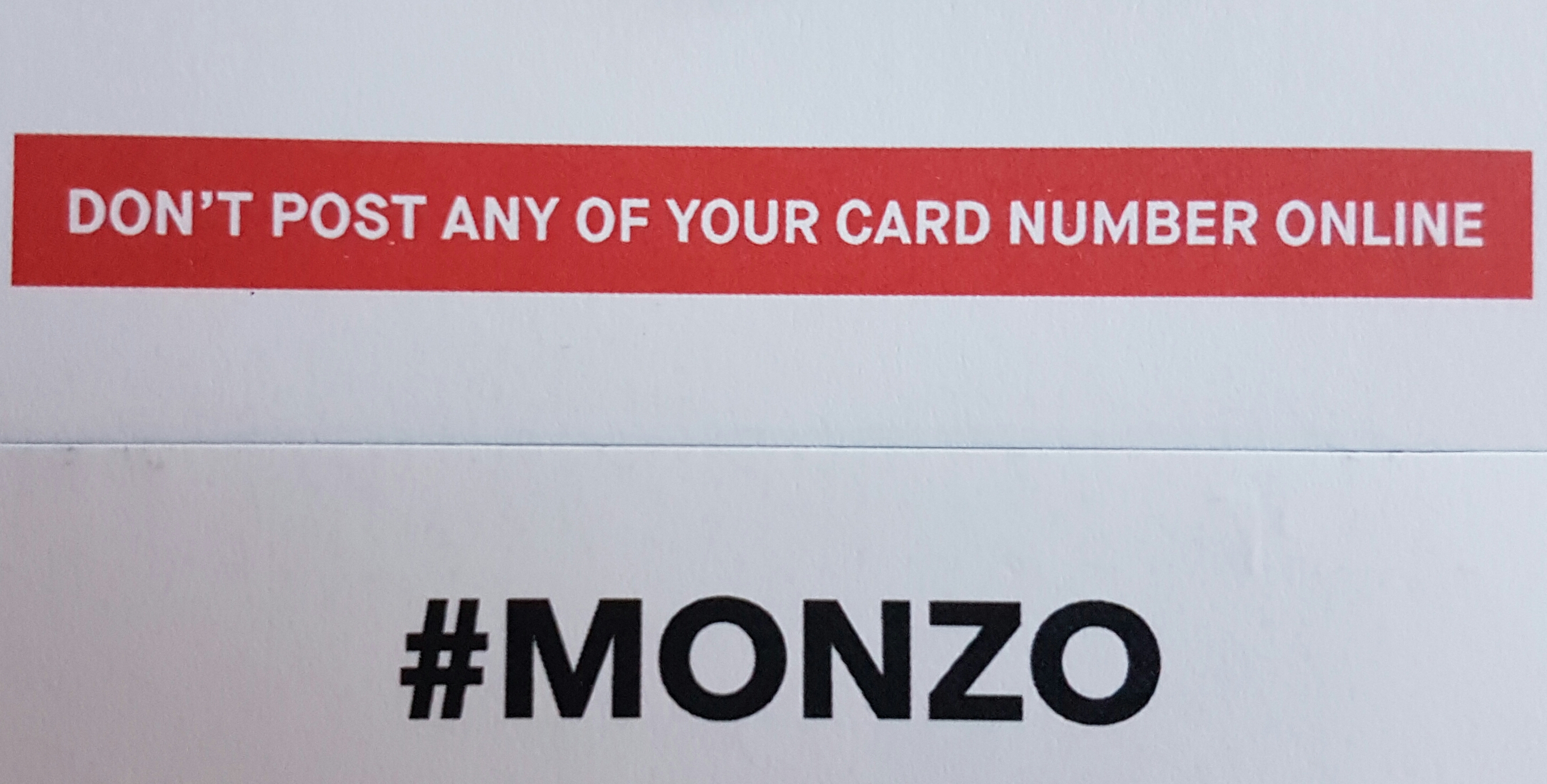 After spooling up the app and entering my card's ID, everything took flight, I instantly received a text telling me my card's pin number - complete with a little card emoji. Then the app took me forward to the transactions screen which at that point only displayed my current balance, the top up transaction, and today's spend. The menu as it stands only has two options, transactions and 'card'.

The card option displays info on the card currently tied to the account, provides me with an option to top up, and, importantly, provides me with the ability to freeze the card, instantly. This in banking terms is a groundbreaking feature? Lost my card? Frozen. Weird transactions? Frozen. A process which could take over an hour in phone queues and ID validation has been reduced to a split second job. This is excellent.

Back to the transactions screen, I wanted to see it in action, so I added my Monzo card to Android pay (which doesn't work yet) - resulting in a debit of £1 and a repayment of £1. This is where another core feature of Monzo comes in, instant notifications: 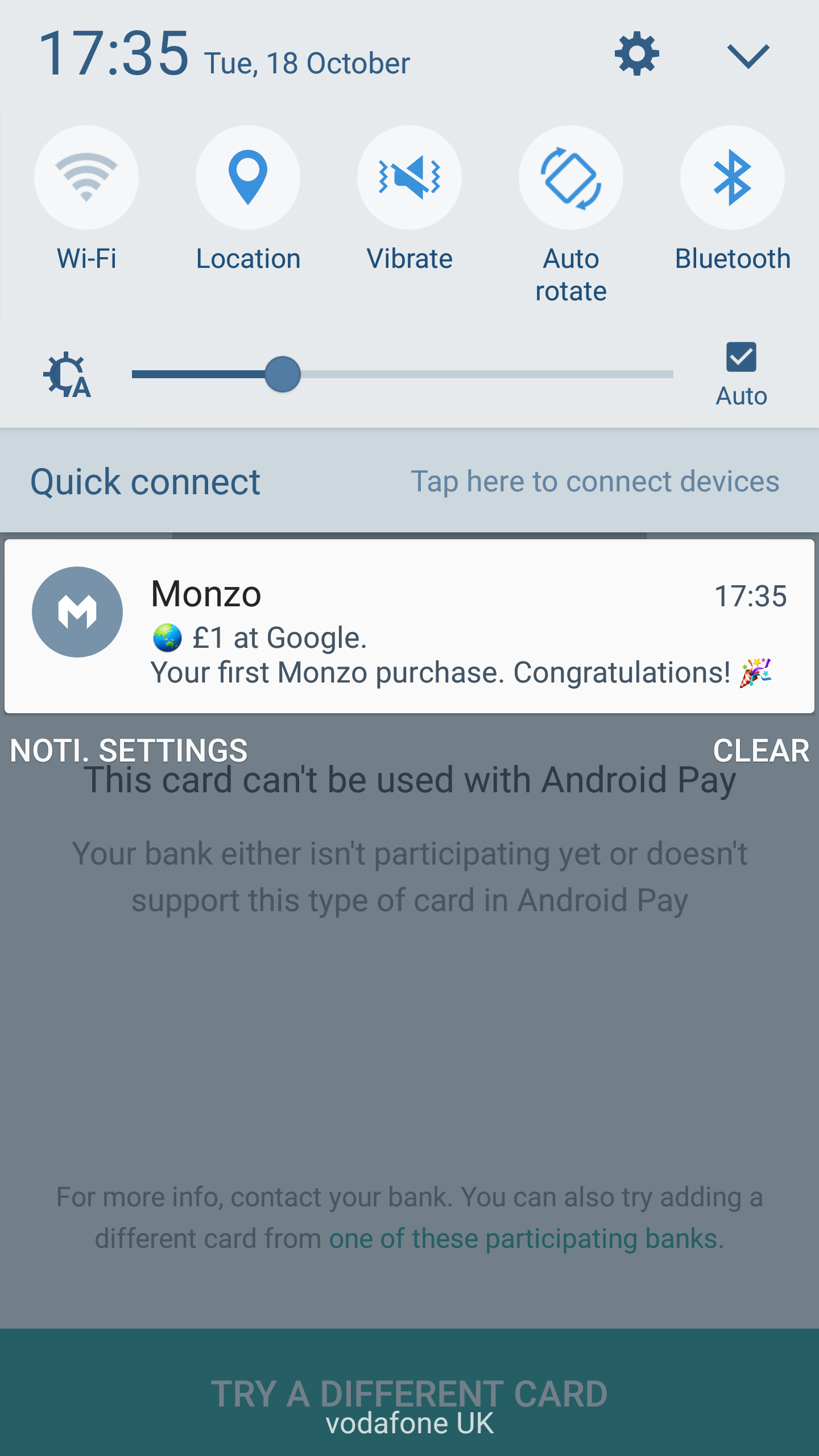 Even on my watch: 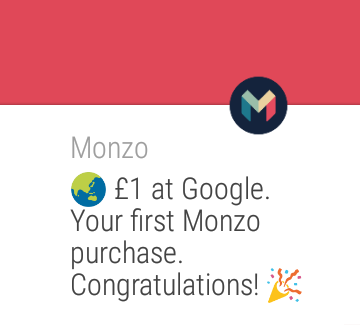 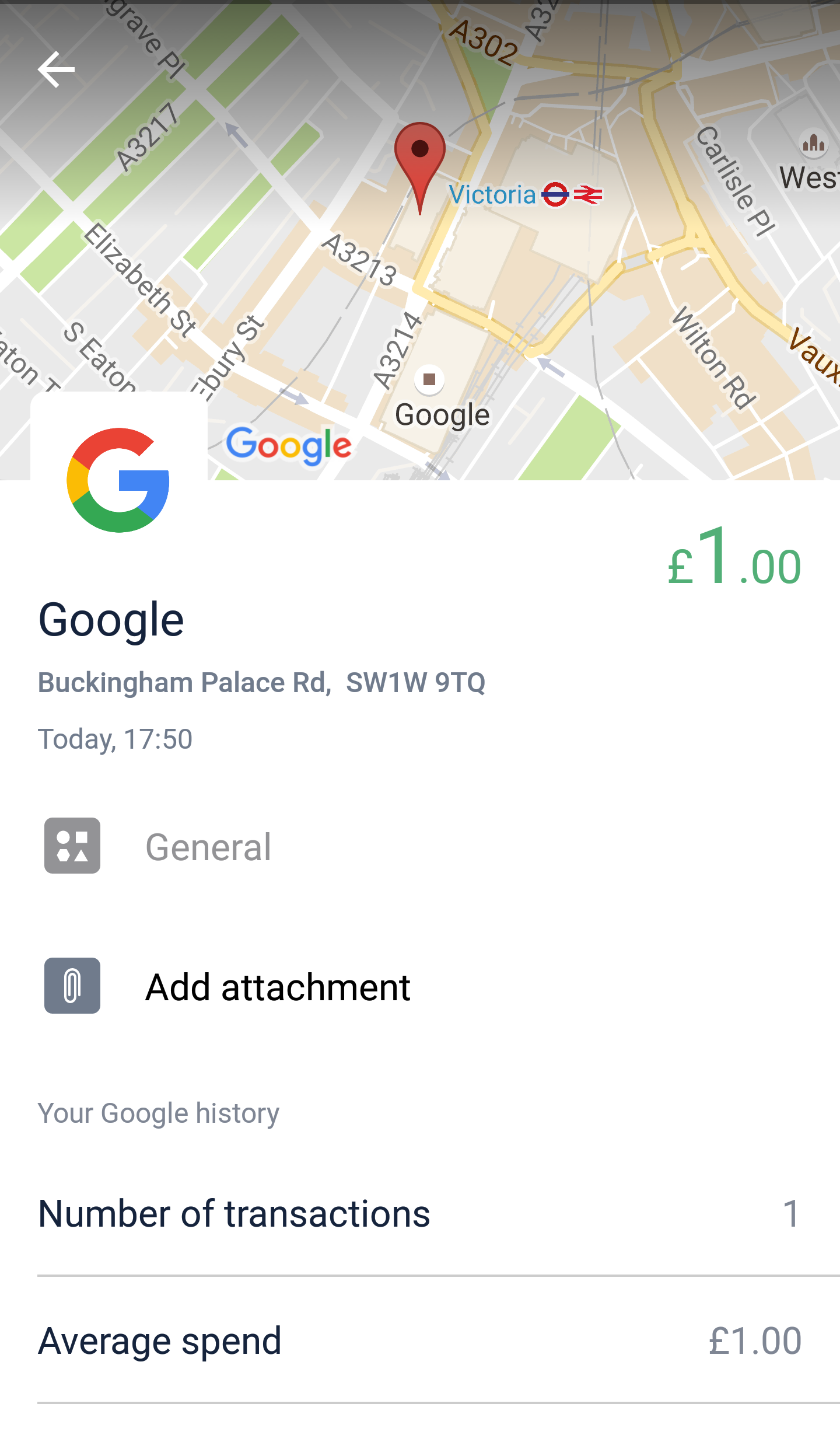 This is another excellent feature of the app, it geolocates every purchase. Of course this being a web based transaction, it shows up as Google's UK HQ, but if it was, say, a local Starbucks, this would show me the location, time, and amount I spent. Overtime, it'd show me how many times I've bought from that Starbucks, how much I've spent, and so on.

The other two key features of this page are the category and attachment. The app attempts to categorise each transaction, this I presume will then feed into the upcoming (already available on iOS) spending breakdown. Additionally, you have the option to attach a note, photo and file to the transaction, this is great if you're the sort of person who buys a lot on company expenses and wants a simple way to manage it (rather than carrying reams of receipts around with you.)

Here's the category screen - I'd like to see custom categories:

That's the Android app as it stands. It's not groundbreaking, but there are a few standout features. I like what I'm seeing, the design is good, the concept is good, now it's about execution. It'd be really easy to miss out key features, and equally as easy to swamp it with so many features that it loses sight of its goal, especially as the user base grows. So what is next? Monzo have published their roadmap publicly, you can view it here. Notable features I'm looking forward to are:

The last two are of particular interest. The idea of a saving pot, built into a bank, is nice, but it's not special, what the post suggests however is that they may allow you to add rules to automatically move your money around - this is the moneymaker. The ability to set a rule so that on payday £X is moved into a pot for the holiday I want to go on next year, with alerts on the total amount in the pot. I'd like this to then expand into being able to direct incoming standing orders to a pot rather than the main account, to be able to opt for an overdraft on the pot (allowing it to steal from the main account if it overruns, and telling me about it.)

External integrations, well, it speaks for itself. The bank already has a rudimental, and growing, API - I'm not going to say too much on the matter because we could be here all day imagining the possibilities, but the one that leaps out to me is integration with AI personal assistants - Google can already tell me when to set off to get to an event on time, what if it could also estimate my spend, based on spending history at the destination? What if it could use that to work out if I had enough money? What if it could recommend things to do in the area based on how much money I had - taking into account transactions pending before a designated payday? What if... There's a lot it could do, and with no great difficulty either, but I think an AI integration, even if it's just an AI from the bank that does automated analysis of your finances, recommendations, long term and short term trending, proposed budgets, and financial estimation. The data is there, it needs to be put to use.

There are a few other features I'd like to see, that aren't on the roadmap. The roadmap mentions shared accounts, I'd like to see managed accounts. The app can track expenses, so why not allow businesses to set up accounts for employees, issue them company cards, and then have access to all transactions on that card, see the attachments, locations, and so on. This would allow simple expenses for employees, and simple expense management for employers - in fact - it'd provide a greater level of oversight. Better still, why not allow an employer to impose limits on those cards - max transaction, card validity dates, you could even allow them to assign a virtual pot to the card or set it as prepaid only. Complete control - no fuss.

Of course there's a security concern here, third parties get involved, who get involved with third parties, and before you know it there's a freelancer in Cambodia with indirect access to your bank account - it's far fetched, but only just. I think any external integration, whether it's Google, Nectar, TFL, an airline, needs to be an optional opt-in for the user.

There's really nothing bad I can say about the app so far, it's basic sure, but it's a beta so that's to be expected. I'll use my card over the next few weeks, try out the new features as they're released, and probably write another post then. The only issue I can call it out for now, there's no security on the app as far as I can see. It's not a big deal now since transactions can only be done via the card, the worst you could do is freeze my card - but when the app can send and retrieve money, I think it's a given that it needs to be harder to get into than it is now (a simple tap on the icon) - passcode, 2FA, pattern, fingerprint, all four, whatever, it just needs something. It's a pretty, it's minimal, it's modern, but, it's a bank, despite modern trends, security must override UX.

That's all for now, I'm really looking forward to using my card and seeing what features Monzo come up with, if you're interesting in getting one for yourself, head over to their website and sign up!

Get the latest posts delivered right to your inbox.